Scottish Heraldry and Coat of Arms

The Lord Lyon is the heraldic authority for Scotland. He deals with all matters relating to Scottish Heraldry, Coats of Arms and maintains the Scottish Public Registers of Arms and Genealogies. It is not widely known there is no such thing as a clan crest or family coat of arms. Arms belong to only one person at a time and a clan chief has Arms that are personal to him or her and which no-one else can use. A member of a clan is allowed to wear the chief’s crest encircled by a strap and buckle containing his motto.

Anyone living in Scotland or those of Scottish ancestry domiciled in the Commonwealth, except Canada and South Africa can apply for a grant of Arms if they are ‘Virtuous and well deserving persons.’ Petitions can be drawn up for eligible applicants to submit to the Lord Lyon King of Arms to matriculate. Applications usually take one of the following forms:

All statements made in Petitions must be accompanied by legal proof, usually certificates of birth and marriage for statements of parentage and ancestry. It is the Petitioner's responsibility to provide this proof. Petitioners may employ their own genealogist to research and provide the proof. I would be pleased to discuss the evidence required and the procedure, if you have a Scottish ancestor who was granted Arms or you wish to petition the Lord Lyon for new Arms. 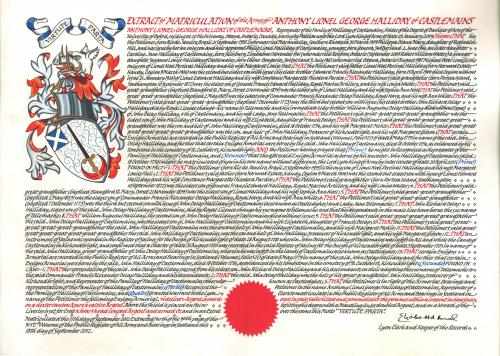 For an example of a report from Scotlands Genealogy download below:

Using the numerous repositories throughout Scotland and visiting your ancestral locations Scotland's Genealogy will endeavour to answer your enquiry. Whether a single event, family tree or social history we will offer a bespoke service.

Scotland was the first country to establish a national system of registration for land and property 700 years ago.

Apply for Coat of Arms

Petitions can be drawn up for eligible applicants to submit to The Lord Lyon King of Arms to matriculate new arms or existing arms.

More on Coat Of Arms

Palaeography or the study of old handwriting is a skill family history researchers need to decipher Secretary hand, the common style of handwriting in Scottish documents.